This zone includes all the Routes included in the Frech Way and other Routes who merge at one point with it.

The Camino Francés is the most traditional and busiest pilgrimage Route since the late XI century. It goes through the north of Spain up to the western end, following the trail marked by the “Milky Way”. It is considered the first European cultural Route known as “the Main Street of Europe”. In 1193 it was declared as a World Heritage Site by UNESCO. 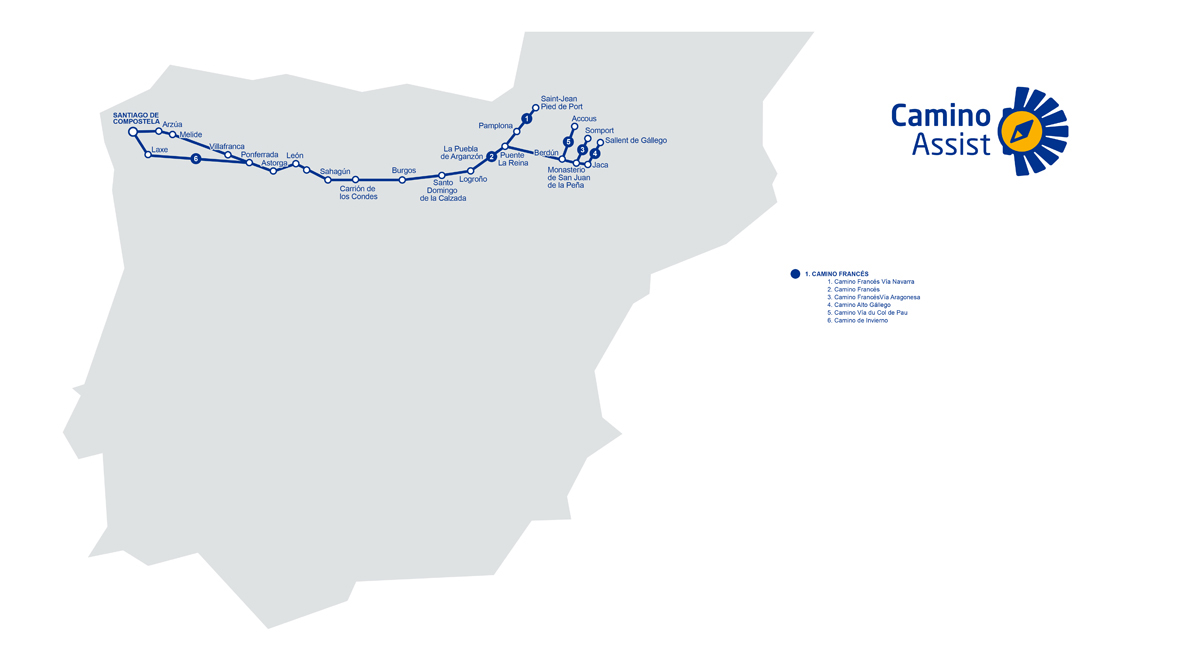 In this area it is included the “Primitive Way” that connects Oviedo and Santiago de Compostela. This is the original Route used by the Asturian monarch Alfonso II the Chaste, who was the first pilgrim in history who travelled to Iria Flavia to testify that the remains found there belonged to the Apostle Santiago. Then he ordered to build a church to worship the Apostle on which the Cathedral of Santiago is built today. In this zone there are included all the Routes going across Northern Spain to Santiago de Compostela and the ones that converge with the French Way.

The Northern Ways were the Routes taken by the first European pilgrims. During the Middle Ages, there were also the favorite itineraries used by those pilgrims who came from abroad to reach the Coast of Spain travelling from England, Flanders, Germany and Scandinavia, and landing in the safe Ports of the Cantabric Coast. Later these Routes were merging with other Routes of the French Way. 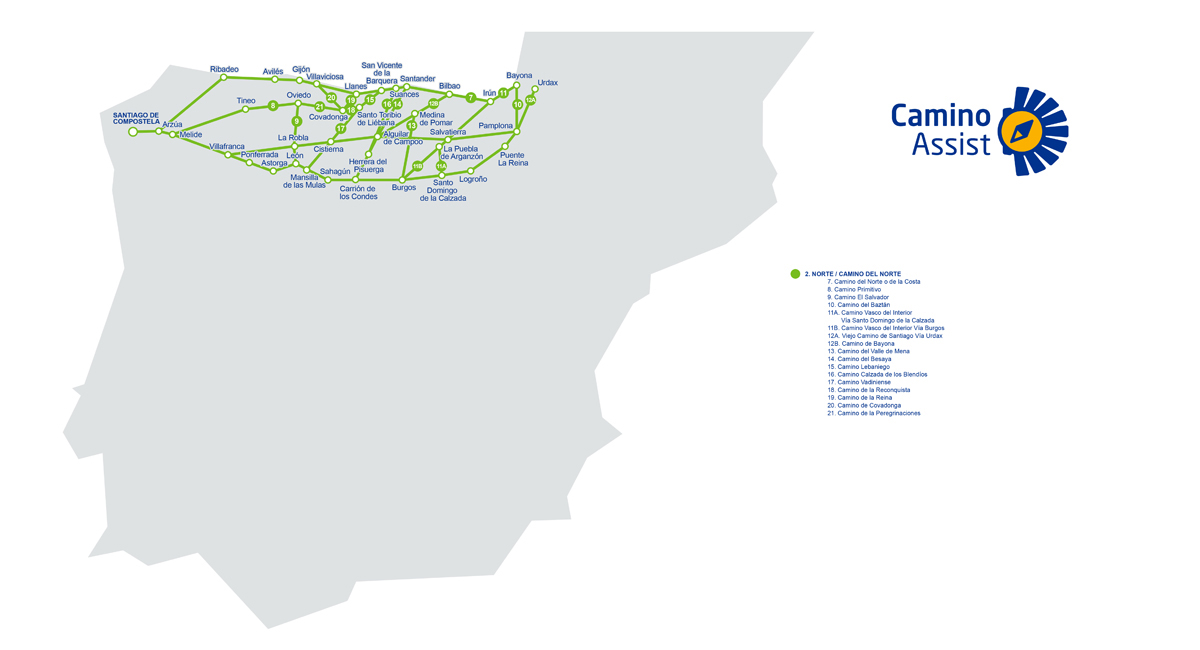 In the region of Galicia, you can find different Routes coming from the south of the Peninsula and Portugal going across the Galician coast to Santiago de Compostela. One of this Routes follow the journey of the Body of the Apostle from the Ria de Arousa to Santiago. Other is called the English Way, which is very used by British pilgrims starting in El Ferrol and La Coruna. In Galicia we will also find the Jacobean extension of the Camino to Fisterra, the top western point of continental Europe. This is a pilgrimage place for many peoples during thousands of years. 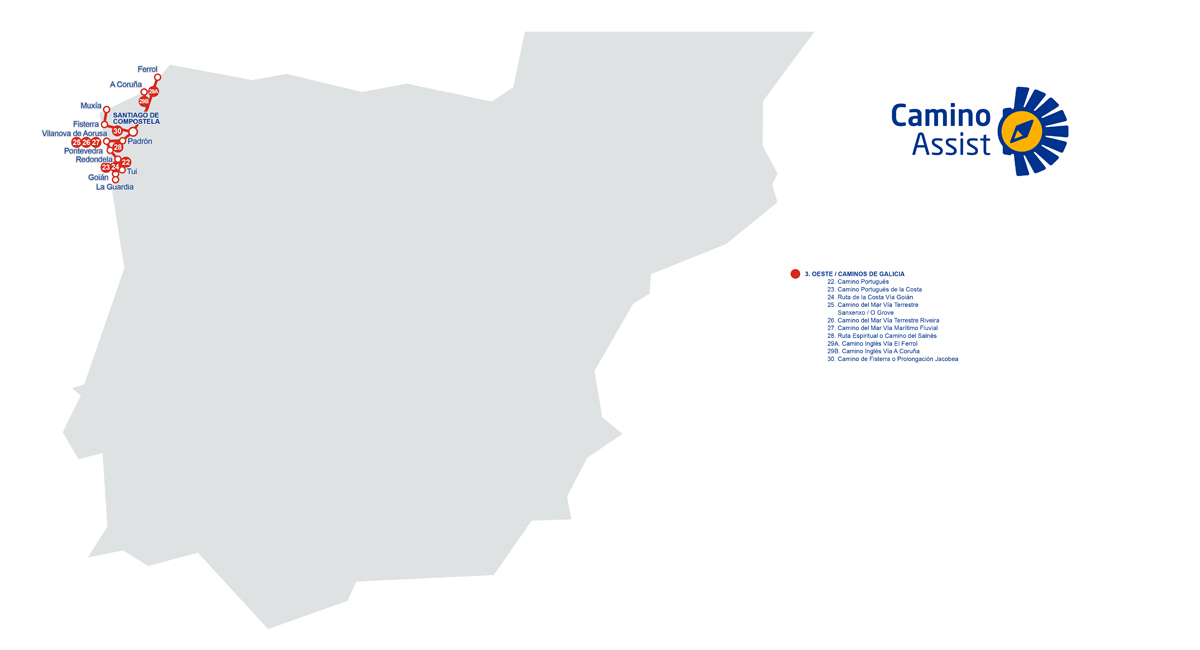 These Ways link the South of Spain to Santiago de Compostela following various Routes that join the ancient Roman Road of Via de la Plata. Throughout the history, these routes were used by early Christians living in the southern part of Spain to start their pilgrimage to Santiago. 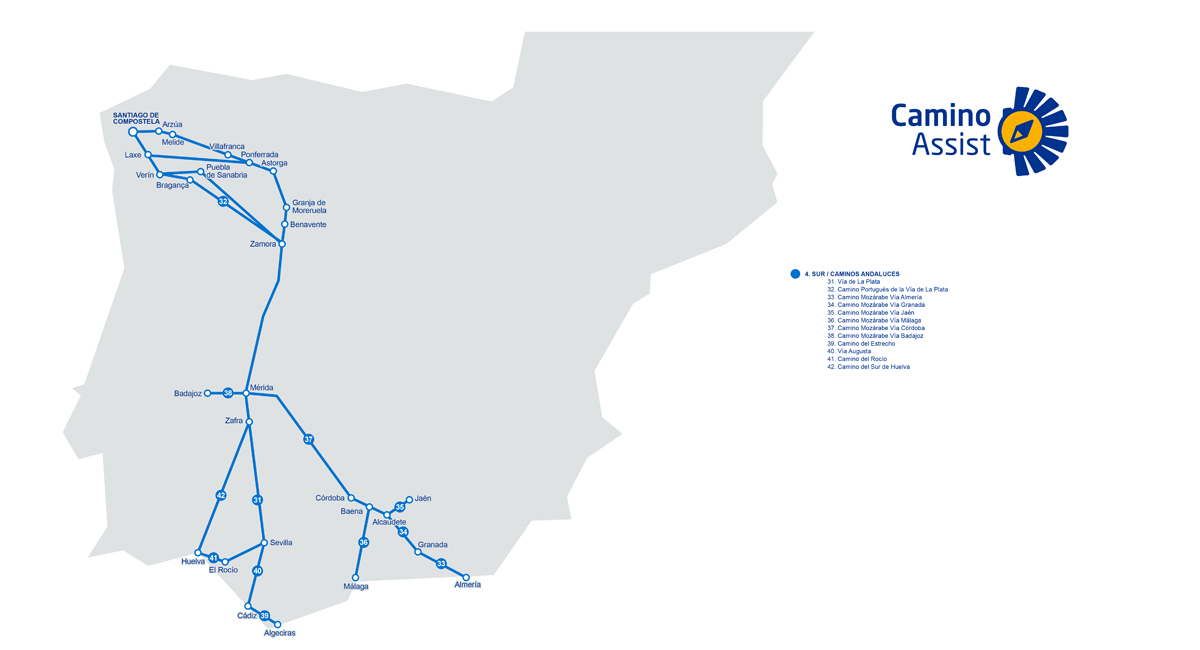 These routes connect the center of Spain with Santiago de Compostela. They were used for centuries by pilgrims from that area following ancient sheperds and trade Routes. The Camino de Madrid has a great tradition since the Middle Ages. 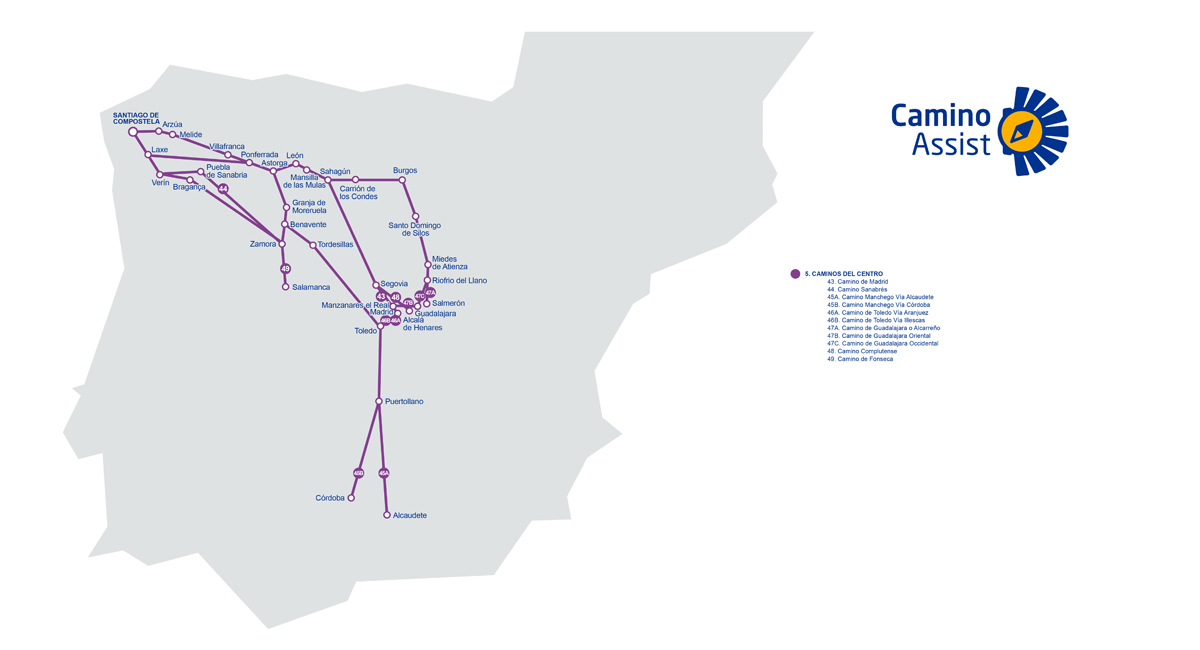 These ways link the East of Spain and Catalonia to Santiago de Compostela. Some of them start from the Pyrenees and connect to France. There were used by pilgrims from Italy and Eastern European countries whom during their route they used to pass through the Monastery of Montserrat. The Catalonian Coast were welcoming for centuries pilgrims coming from different countries of the Mediterranean basin arriving by boat to start the Jacobean pilgrimage 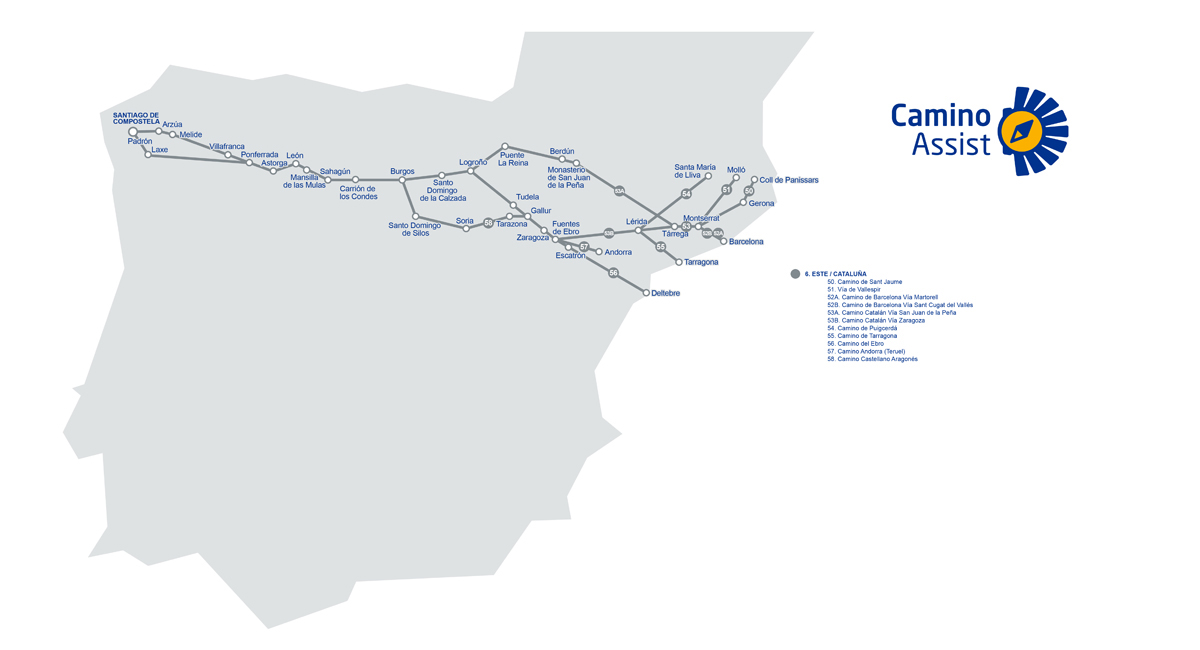 The Southeast routes link the Levant region of Spain with Santiago de Compostela, following ancient routes used by merchants, shepherds and shearers. They were also connecting the Mediterranean ports of this area, where pilgrims arrived from different countries bordering this pilgrimage route. 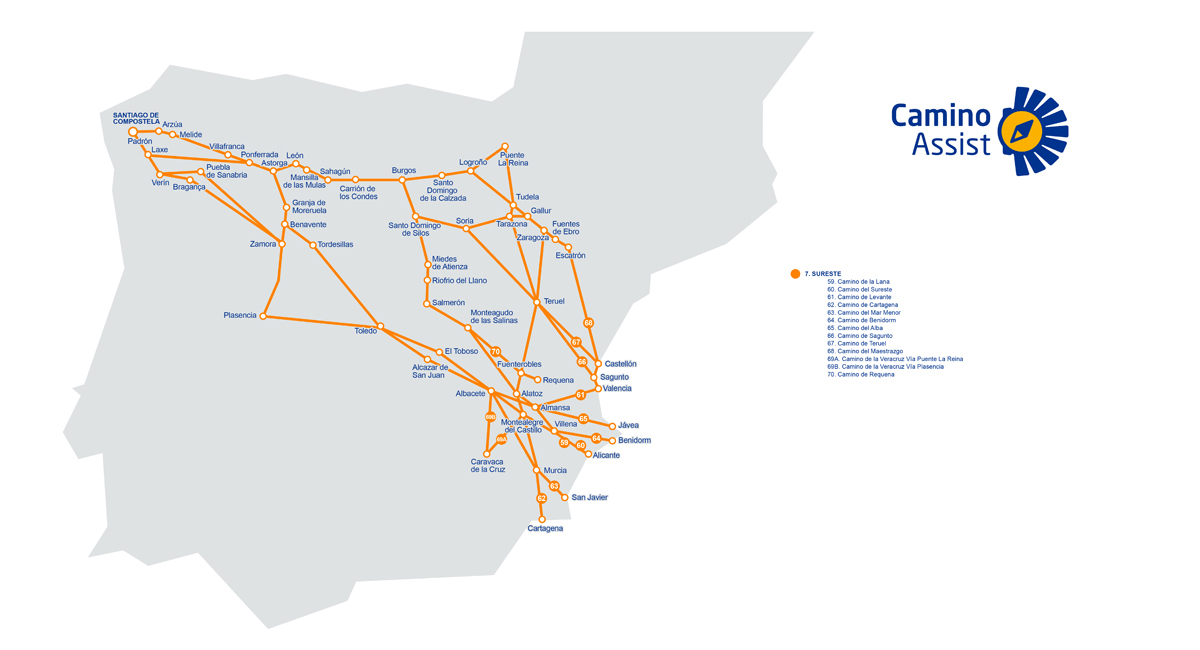 These are Pilgrimage Routes enabled by the Associations of Friends of the Camino de Santiago of Gran Canaria and Tenerife.